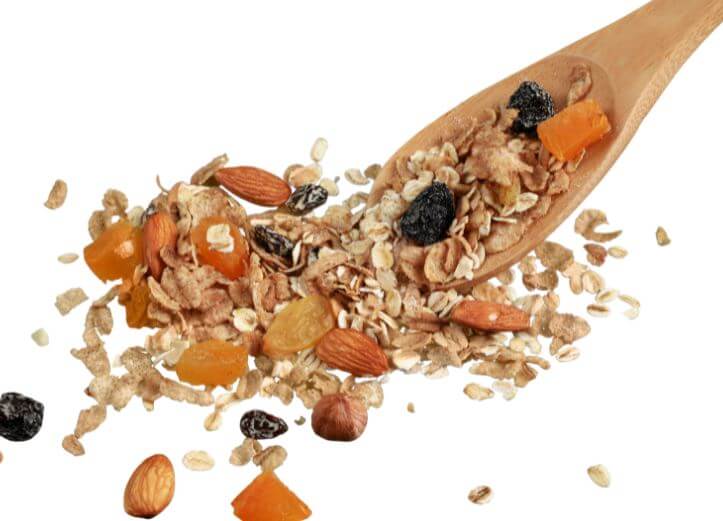 Many people have asked questions about Granola, how it’s produced, and its effect in recent times. Granola can be seen as food prepared from a mixture of nuts and grains, which is also mixed with honey and other ingredients. It is usually consumed in the form of a mixture.

While mixing, make sure that the mix is crunchy. Later on, dried fruits like bananas, coconut, apricots, and others are added. The resulting final product is rich in carbohydrates, proteins, fatty acids, fiber, and other micronutrients. It provides the following to the body: magnesium, vitamin E, copper, iron, etc.

It is mainly carried by people who camp, backpack and hike because it’s very nutritious, high in calories, light in weight, and straightforward to store. It Is eaten as snacks, breakfast, or dinner but must combine with milk. If eaten in excess, it may lead to weight gain.

Granola was started around 1830 by an ardent American promoter of the vegetarian diet named William Sylvester Graham. Graham invented graham flour which it later supplemented to ground bran flakes because it’s formed from wheat.

Some years later, Jackson James used the idea of Graham flour to create his toasted cereal, which he named “Granula.” Due to his work, in 1870, another doctor named John Harvey Kellogg, who was James’ colleague, was inspired. He revisited James’ recipe and later created his blend, which consisted of oats and wheat, which he used and finally called his cereal “Granula.”

Due to copyright, Harvey changed his cereal’s name from “Granula” to “granola.” Later on, Granola lost its value and became an exile because it lacked tasty, bland, and sugar-free Granola. Harvey later invented another type of Granola called “corn flakes.”

Suddenly, Granola became a hit among a group of people in 1960 called the hippies, who were members of a cultural protest movement in the United States of America. Knowing about Granola’s high nutritional value, hippies started to share the same with others.

In recent years, Granola has become a breakfast for most homes worldwide. However, it later reduced the quality because many companies wanted to sell it. Although it has high saturated fats when appropriately prepared and eaten in the right way,

One thing about Granola is that it offers many health benefits, and it’s considered a healthy snack.

One thing to know about Granola is that one should take it with a lot of yogurt or milk or delicious ice cream to enjoy it more. The addition of milk or yogurt also adds to its nutritional value.

The first choice of hikers and backpackers, Granola, is straightforward to carry and store. Granola from Munchilicious is loaded with various nutrients needed by the body. Knowing about Granola and its benefits is all you need to add this perfect protein and energy food to your meal.